and it's not peeking in your window!!! Really it's not.
Oh what a peacefilled sleep last evening.
But after the Huntington Beach Police Department﻿ were taken away from more important matters to come and visit me to talk about a quadcopter that was no where near the windows of a neighbor and makes a LOT less noise than her dog does howling at 0500 nearly every single day of the week. Another neighbor filed a complaint against her, but she probably thinks it was me. I'll bet the CEO of Boeing would love to know about this and consider whether or not this person, initials CW, should be in their employ any longer. I'll be happy to discuss that should they read this posting. Definitely not a good reflection on their company and they need good reflections in these times.
I've decided as a Veteran to exercise my 1st Amendment FREE SPEECH rights with this posting. I don't like being falsely accused of ANYTHING, much less of taking pictures of someone like this person. If you want to lie, lie to your husband, don't lie about me because I ignore you. Just saying.
Based on that experience last evening after speaking with the nice officer, I decided to take my quad to the park this morning which sits next to another neighborhood, and to do some flying along with some picture taking to show what a person looks like from 200ft up in the air being filmed from one of these things that does not have zoom in it (unlike the military versions). And that person was ME and I have my permission to film me. By the way, if I ever snapped a photo of someone who didn't want to be filmed, I'd be happy to delete it. Hasn't happened yet out of more than 50 hours of flight time, but just in case.
This is one of the images I shot last evening where I was accused of filming some neighbor. Am not sure if you know this, but this image was taken 200ft in the air looking towards a sunset. No neighbors at that altitude unless they're high!! 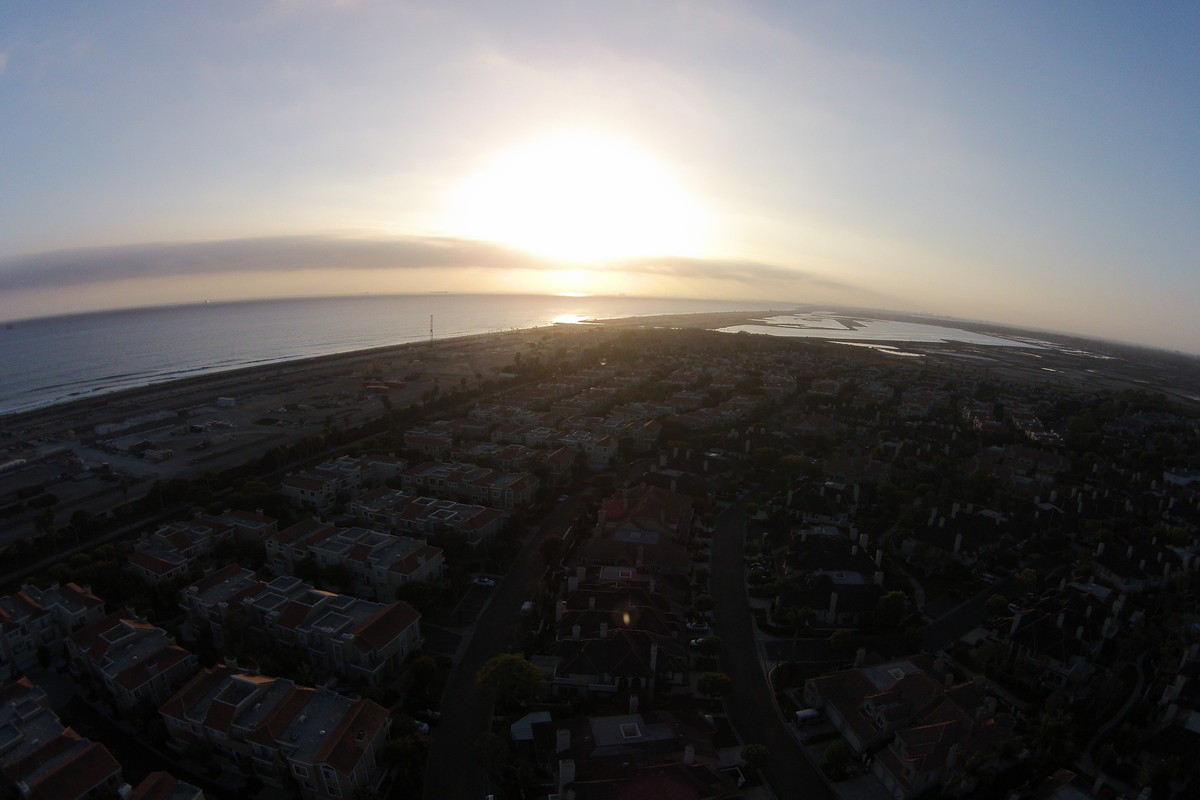 Notice the pictures below. One is of the iphone screen showing what the camera is looking at. Where it says ALTITUDE, that's feet above sea level - 221.7ft in this case, the Distance number is horizontal distance in feet away from home point (set before takeoff), in this case 129.6ft. You set a home point with this equipment so that if it loses signal from your remote the gps onboard will initiate a RETURN TO HOME command so that the quad comes back to where it took off from. This is provided you've not run so low on battery that this is not possible. In the upper right corner of the image, you see the wireless icon, 69% is how much battery power is left, SD is that it's filming to a microSD card, the 15 is next to a satellite which means this has a fix on 15 satellites which know exactly where it is and where it will return to should there be a problem. Lastly the icon above the 6355 is the wireless repeater which shows I have a connection between my phone, the repeater and the quad, and the 6355 is the number of potential high resolution snapshots (HD 4,000 x 3,000 pixel pictures) or HD Video I could shoot.
Now, notice the tiny red dot? That's ME! So this camera is not looking in any windows. 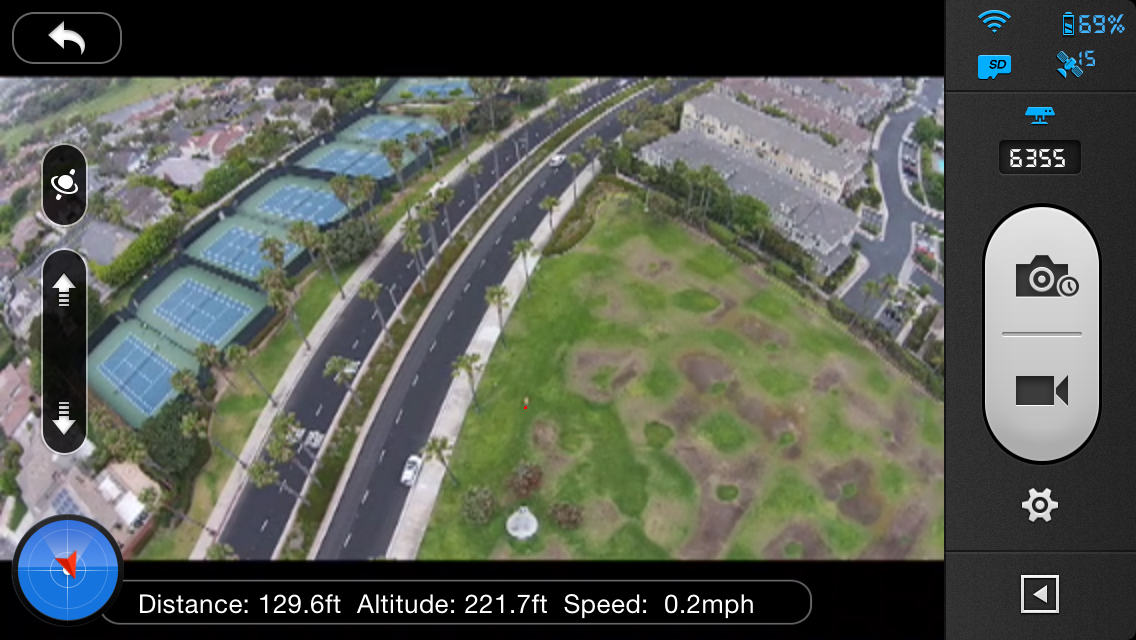 The next image is me from around 100 ft up. Can you tell what my footwear is? Can you see whether or not I am wearing glasses? If I didn't tell you that the white thing near my chest is the remote control controlling the quadcopter would you know? Can you discern any details about my facial features? 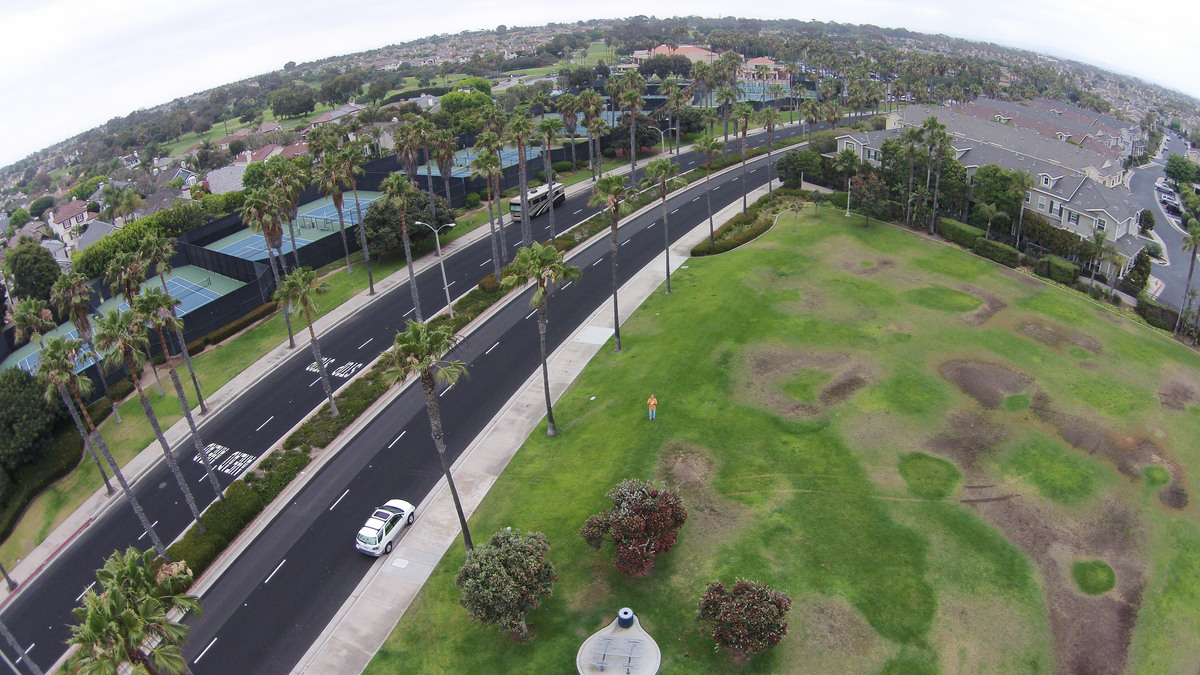 I thought so. Before you make a phone call to tell the Police outright lies about people, be sure you know exactly what the heck you're talking about, or you could open yourself up for a lawsuit which may cost more than the house you're living in.
Here's a video sample as well and there are more on my Pinterest page (see info before the end of the posting)
I don't screw with people. I live my life, I go visit my 84 year old (this year Mom with Alzheimer's twice a day, 5-7 days a week) and I make sure others rights are respected. Unlike this person who took it upon themselves to accuse me of inappropriate things. I wish the Policeman would have taken time to see the images shot yesterday because he could have easily called her on her lies, but...I want to make sure others are informed and so they can become less paranoid.
People want to know what I am going to use my quad for. Real Estate for one. Great pictures of surfers for another. Amazing Sunsets that you cannot capture from the ground, and other things. I am always approachable by people and many have approached me on the beach and such when I fly asking questions, etc., always nice. In fact on my pinterest page you can see some of those images of those people.
I don't peek in windows. I don't buzz women in bikinis on the beach, and I don't scare kids with this piece of machinery (in fact, before launching last evening to shoot a sunset I asked my other neighbor to keep his kids back and he did so, we've talked about these things before so he's totally cool with it). I answer questions, I share, and I empower others with knowledge. That's my mission in this lifetime, and should the Huntington Beach Police or other departments wish for me to take some time to share what I know with their people, it would be my honor as a US NAVY VETERAN to be of service and do just that.
Don't waste the time of the Police. Whether you're a man or a woman with a chip on your shoulder because your husband is out of town a lot, ASK questions, and become informed. Don't ASSUME, and don't lie to law enforcement, it's not the right thing to do.
**And for those asking "is it illegal to fly these over the beach? I was actually approached by a Huntington Beach Supervisor after flying near the Pier one day, and we were talking, he was asking me questions and then asked if I'd ever flown out to the end of the Pier. I said no, and in fact one of your guards just told me that there was a rule about flying this over the beach. He replied "We have no such rule. As long as you're careful, you're not buzzing the girls in the bikinis or endangering anyone, have fun and be safe. We have some people who do those things, but I watched you fly and you're very safe, very respectful so we have no problem with what you're doing sir".
Nice to know there are people out there who get it, and who understand. If anyone in the NEWS MEDIA would like to do an interview based on this, please find me at @docmurdock on twitter or on facebook at: http://www.facebook.com/docmurdock private message me and I'd be happy to speak with you, or you can look my contact information up on my ABOUT section on facebook.
And if you'd like to see more of my images, please feel free at: http://www.pinterest.com/docmurdock/phantom-2-vision-images/
**NOTE - If you are reprinting any images or using them in any footage, please use the following credit: Images by Michael Murdock, DocMurdock™
Thanks for reading, God bless and may you have a Happy Monday
Michael Murdock, US NAVY VETERAN