I guess being listed on page 1 of BING out of 45,000,000 is not too darned bad. Maybe we just promote Microsoft's search engine as the place to be listed and wave a big ole birdy at Google! Stuff happens!  If you kids want to talk, I am available.  Love,  Mike 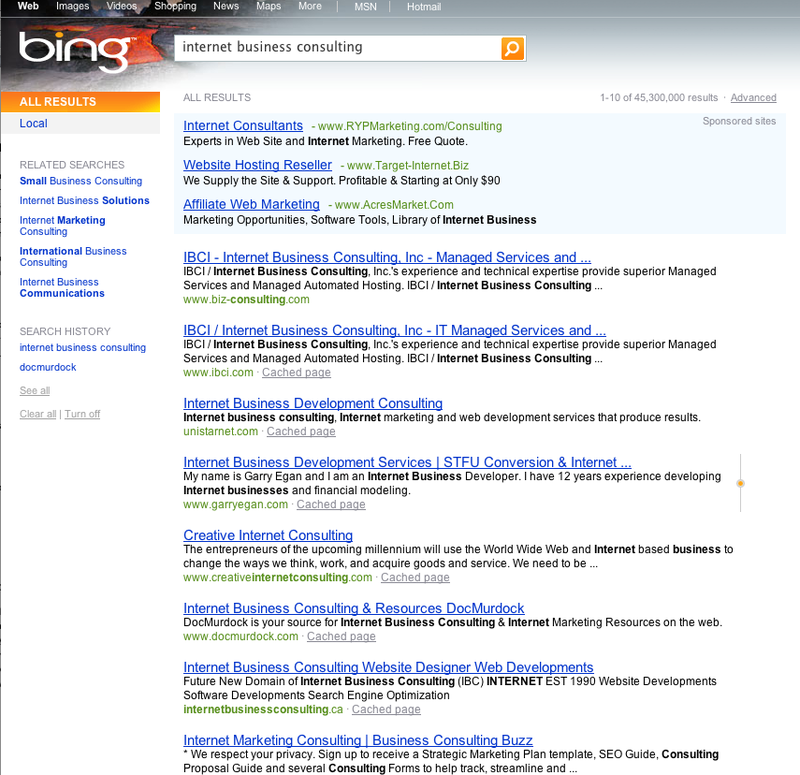 Is that you can sometimes use things to prove your point.
Today I posted an email about Google. It's was funny because I checked my website ranking for my primary keyterm at the time that I posted the email. What I did not do is make a screen snapshot of it. That was my mistake. I was ranked #2 out of 29,900,000 after being wiped out a week or so ago for making another posting about Google. It's not a position which you can get delisted from unless someone purposely pulls you out. It appears they did.
So today GMAIL crapped out. The ever-loving CLOUD took a dump and GMAIL went down. So I posted a note to Posterous which went out everywhere including into my blog which when you open the blog up right now it looks like crap for some unknown reason, maybe it's on the same server as GMAIL is! :) Just kidding...or maybe it really is.
The bottomline here is that Google which is supposed to be a search engine filled with facts and things has somehow skewed the numbers a bit. What they did not do is search back into the history of my blog because if they had, they'd have seen a little article that I wrote last month (July) where I posted what my ranking was at that time, #2 on google for the term of internet business consulting.
However, when you go on there right now and search and even if you click the options and enter the date of 7/20/2009 for some reason I don't show up at all. Now isn't that special!
Well, below is a screen snap of my blog which I posted on that date which shows where I was ranked. Now what GOOGLE should do is accept that they are not without fault, and boost their datacenter, enable failover of their ever-loving clustered to death machines and be able to handle something that is not basically the result of GOD showing up and shutting them down.
What you'll see is the snap of the posting dated July 20th 2009. Next you'll see a search done tonight that basically says that this picture below is incorrect. Too bad a I have a series of them from different dates and they're not photoshopped. 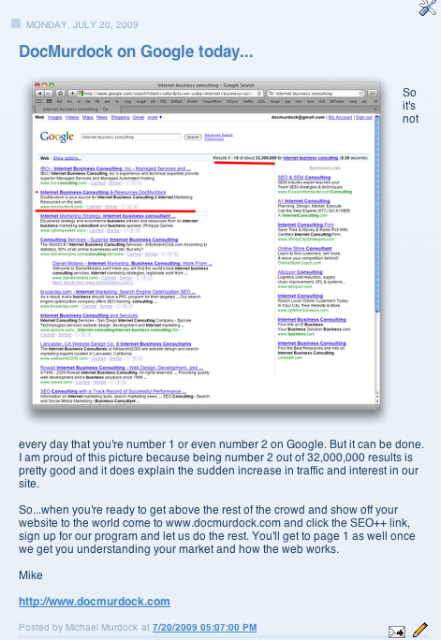 Something is wrong with the picture below because according to that search my listing should be there
as July does fall between January and August. 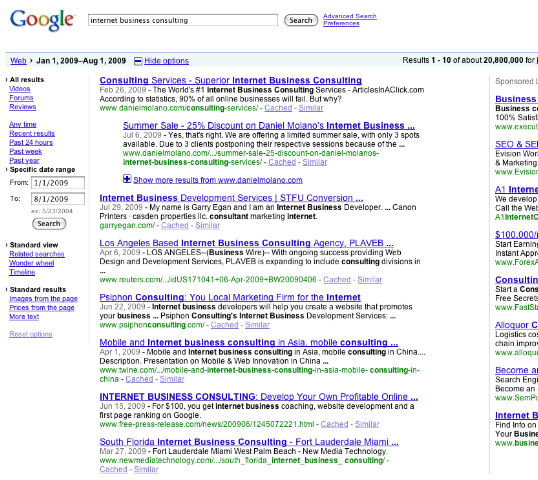 And of course below is from the control panel of the blog...come on people, you can skim a blog for entries that you need to delete right?

What they should not do is scrap a listing to a website that is actually a viable resource for people who want to legitimately get listed into their search engine and one that's never violated their terms of agreement, listings, etc in the entire time it's been in existence all over an email which voices an opinion that's critical of their work.
If anyone over there had any balls they'd pick up the phone and offer me a job helping them overcome things like this as a failure of a system such as GMAIL that is supposed to be available to all, always is a BIG DEAL and one that's not going to help perpetuate the use of anything other than another program to replace GMAIL and mark it BETA, which we all know it should not be any longer.
There, that's my .02 on the matter, and hopefully someone will see the error of their ways and respect that I did not get to where I am in TECH by NOT being right about a lot of things.
So Google how about putting my listing back. I'm available to relocate to Mountain View anytime we come to a package agreement. I guarantee you that you won't regret the hiring.
Of course you have to beat Steve Jobs and Apple to the punch (and if Steve calls, well all bets are off, my loyalty to Apple is unwavering).
Mike
--
Michael Murdock, CEO
DocMurdock - Internet Business Consulting
ceo@docmurdock.com
http://www.docmurdock.com/
Proprietary And Confidential DocMurdock © 2003
So the thing that everyone is bragging about is cloud computing. Well today in the midst of a discussion with a City Government agency in another state I went to retrieve an email and pdf file from the lovable cloud known as GMAIL and much to my chagrin, surprise, whatever you want to call it...the CLOUD crapped on my parade.
So it's always fun to think that one day everything will be hunky-dory and that cloud computing will totally replace the need for a desktop computer, laptop computer, series of flash drives, dvd's backups, etc, but that day has just displayed that it is far from arriving.
What's really surprising is that with ALL of the redundancy that company should have in place, with all the backup systems, with all of the really cool gadgetry that Google has, even they experience a lack of service.
My questions to Google are:
A. Where's the failover?
B. Where's the redundancy?
C. Where's the Beef!
Okay now YAHOO, here's where you can capitalize with statistics that show you don't lock your users out of your email, but I doubt that Bartz has the stones to step up and cross swords with the GBOYS over their lack of email responsiveness at this point in time.
Those are my thoughts on the matter and of course they know better, they're valued at billions right? How much money did this outage cost users around the globe that are dependent on 'GMAIL'? and when will google reimburse them for it? (About the same time Microsoft reimburses users for Outlook outages due to email preview launching malware attacks on computers running Windows) NEVER!
So please take the CLOUD and blow it away for now until such time as it's NOT DOWN.
Love,
Mike
--
Michael Murdock, CEO
DocMurdock
480-659-8406 Office
480-335-9008 Cell
ceo@docmurdock.com
http://www.docmurdock.com/
Proprietary And Confidential DocMurdock © 2003

I just wanted to take a moment to share with you some quick tips to get your website listed on the web and to start that relationship with search engines, directories and other information respositories.A. go to: http://www.alexa.com/siteownersUse the self-serve tools and enter information about your website into this area. Once you have, your site will get examined by Alexa's web spider. This is a good thing as it will start to keep track of your website traffic. When you first see a number that mentions your popularity it may be in the Millions. Don't panic. Everyone's website starts out that way. Trick to bumping that number, get vocal in the media about something. Get mentioned on www.reddit.com in the WTF category, instantly this number will change and change from red to green. Trust me, I've been one to do this and it's actually fun to see the color change and get below 1,000,000. The closer you get to the number 1, the more popular your website is.B. go to: http://www.google.com/addurl.htmlEnter your site information and a description of your website there. It's ok to use the actual title of your home page in this and use a description that will look nice when people read it. It does not help to format anything, Google will merely take this information, look at your site and pull from what's in the code of your site, the title description, etc, but it will use what you enter into this form as a starting point for your site being listed.C. go to: http://www.bing.com/docs/submit.aspxThis is the new Microsoft Search Engine called "BING". Submit your site URL here. It does not guarantee inclusion into the search engine, but it does mean they'll at least drop by and take a peek at your website.There are many more of these kinds of tips available for free to you. If you're not already signed up, please go to: http://docmurdock.com/megatips.htm and enter your information there to be on the Megatips mailing of 100+ days of marketing tips. It's free and it's great information, an over $1500 value yours free.Thanks for being a DocMurdock Client.Michael
DocMurdock7904 E Chaparral Rd.
Suite A110, PMB # 148
Scottsdale, AZ
85250-7273
US
Wow that was so cool. We covered so much in our last webinar with the www.passion2prosperity.com group. I can hardly wait for the next class...OH THAT'S NEXT WEEK!!!
Have you signed up/registered for our next 16 week course yet? www.passion2prosperity.com/program is where you need to go right now and get signed up, paid for and get in. We've posted the orientation materials and are ready to get rocking with your businesses and ideas this next Wednesday.
Don't miss out on this! It's guaranteed to take your business to the next level and beyond!
Michael
http://www.docmurdock.com
From: Posterous (docmurdock)
Sent: Wednesday, August 19, 2009 4:39 PM
To: ceo@docmurdock.com
Subject: Posterous | Re: Posterous | Re: Gotta Start Somewhere!