« Back to blog
Last night during the Trump event held for Veterans there was a lot of talk on twitter about the money and where would it be going.
At one point I did a search just to see what was happening out in the world of social media. The search on twitter that I did was simply:
trump pockets money 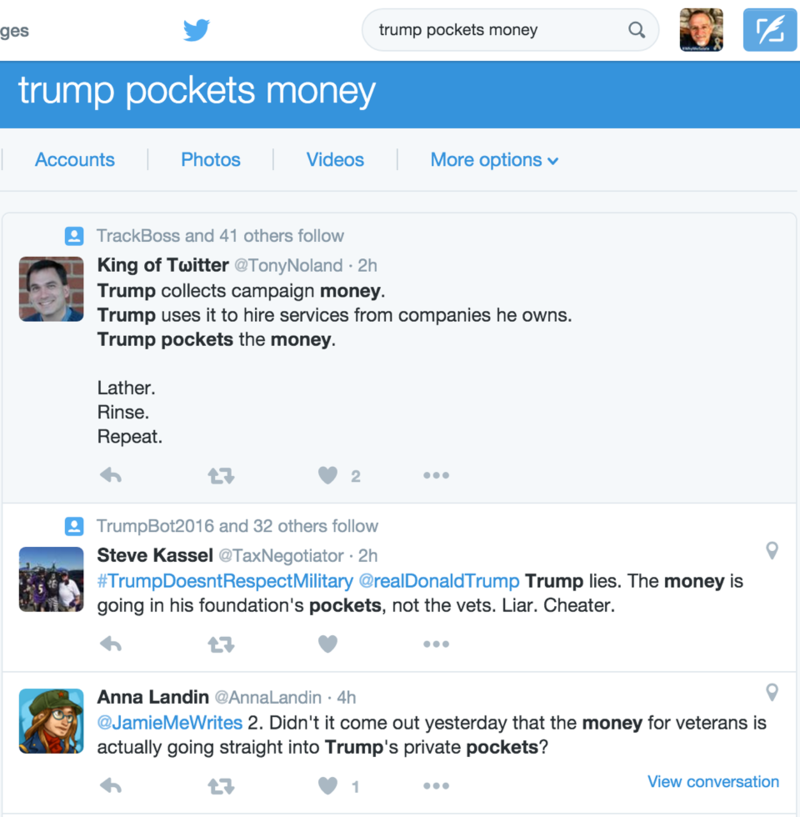 So then I sent a tweet to the campaign manager, see below:

The idea being that when you’re doing something like this, do a press release to clarify where funds will be going to and where they won’t be going to.
Some said that at the event there was list of places where funds were going to be going.
If someone was in a position to do an event around Veterans and not disperse the funds appropriately the uprising would be nationwide and they’d be able to say they screwed their own chances at being elected because there’d be so many voting for others it would make their campaign worthless.
I got so much flak for even asking the question it’s mind blowing. “You’re full of shit”. “You’re a Hillary supporter” and a few other choice things I won’t be sharing here.
In the future, people should actually read tweets before being so reactive in nature.
There are people who will question where the 6+ Million dollars goes to. I’m not one of them because I have faith that the candidate that I am backing is in this race and is standing in a place of integrity. For them not to would be out of alignment with what they’ve been displaying so far along the path.
When you are in a spot of taking in money for a cause, it’s always good to have something handy to share with people that says “Here’s what we’re going to be doing with the money” so that if there are questions, they are answered quickly and people can move onto other things.
And for the record: I am a SUPPORTER of DONALD TRUMP’s campaign. I am a Republican and will be voting for him should he be the nominee. I am also a US NAVY DISABLED VETERAN.
If those things that I’ve written above do not agree with you…perhaps you should find other coattails to hang onto because I’m never changing my position unless: 1. He is not the nominee. 2. Something crooked is found out about dispersement of funds meant for Veterans. 3. He drops from the race.
Thanks for reading.
Michael Murdock, US NAVY DISABLED VETERAN
views